He's quite active these days 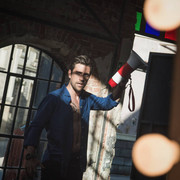 As usual, shows his appreciation to fans

What a lovely birthday present

More wins to you

Thank God he groomed those brows.... look at that bush

Çağlar and his captions

When you know you're looking

So the translation is as seen on FB

"My daughter smells" continues his journey to win prizes. Ertugrul Chaglar won the best foreign actor in a major role and best director of the film

On the other hand, the film is preparing for the premiere in Hollywood at the largest art academy from which
Robert D Niro and Marlon Brando graduated and the second show will be in Beverly Theater Hills (at the Independent Style Festival).

The most important news is that Çağlar Ertugrul is preparing for his new film with the same director Olgun Özdemir who admired the outstanding performance of Çağlar in his film as the “Smell Of My Daughter” ... They will work again and this time a joint production by the US-Kosovar (Serbian) Turkish joint title of his new movie "tatlı süt köpüğü” meaning “Sweet Milk Foam". The film is a film of festivals that will tour the world festivals.

What news do I open to the mother of the soul? It begins with a step

Continuing its preparations to enter the vision of distributing a film, flm has also won the best supporting actress award with the Hevi character brought to life by the 12th London International Film Festival .

Clemence Verniau, Çağlar Ertuğrul, Yılşen Özdemir, Şerif Sezer, Esin Civangil, Tolga Güleç, Deniz Arna, Muhammed Cangören and Fehmi Karaaslan, and You Smell Like My Girl at the 14th International Method Film Festival, which will be held in Los Angeles between March 20-26. America will hold its premiere.

Stella Adler (actor coach of Marlon Brando and Robert De Niro), one of the oldest acting academies in Hollywood , was hosted by two of the historic Lumiere Music Hall and Fine Arts Theater in Beverly Hills. separate screening will take place.

Olgun Özdemir will start shooting the first ring of the trilogy titled “Tatlı Süt Köpüğü" -“Sweet Milk Foam" with Çağlar Ertuğrul in 2020. In the Turkish, American and Kosovo co-production, Ertuğrul's co-star will be announced soon. In the new project, the scenario will take place in the 2009 Kosovo beauty Arbnora Ademaj.

Hopefully he rounds up AA soon, so he can finally move on to new projects.

Passed on to some of his FHvK mates among others....

Çağlar looking so yakışıklı for this interview. Even very casual and laid back at home, dude is a snack

He should always keep the beard


And as usual, repping his hometown Karşıyaka with that t-shirt

2 interviews in so many days... hayırdı Çağlar bey? We're not used to seeing you so busy

Summary of his XOXO interview..... as seen on FB.

🎙The essence of Çağlar's answers in this interview on 30.04.2020: He has been in Urla since the end of March, with his parents, takes care of the garden and helps his parents. He plays sports, but does not go out, observes self-isolation, he is healthy.

He worked hard with the team of Afili Aşk for a whole year in the series with great pleasure.

He lacks the freedom to travel, he planned to travel around his country and abroad after the end of the series, but events prevented him.

He is writing a screenplay for a film - detective, a funny comedy.

Together with Atılgan Gümüş (actor) he has a theatrical project, but he doesn't know how this will happen in the new reality.

He tries to be an exemplary citizen, responsible and conscientious - he pays his taxes strictly.

He doesn't like contact very much (but he never refuses fans to hug him if they want to, that's what a fan said), he takes good care of his purity - physical and spiritual.

He cares about people, animals, nature and the homeland.

His message for September 1 to the state and the world is to direct efforts and funds to agriculture and the production of environmentally friendly energy, to the people - to preserve love and mercy, to himself - to play sports, not to be lazy!

By the way, he interrupted the interview twice to go to the garden and protect the cat with the kittens from other aggressive cats. (if you remember his picture for Mother's Day with the cat and kittens )

especially for someone who isn't so active on SM....
But then there are so many impersonators that even I have fallen prey to, that the blue tick is quite necessary for differentiation