Galiba Akgun will go out at the end of episode, but fist Soner will join him inside


Soner can be really romantic and take caring 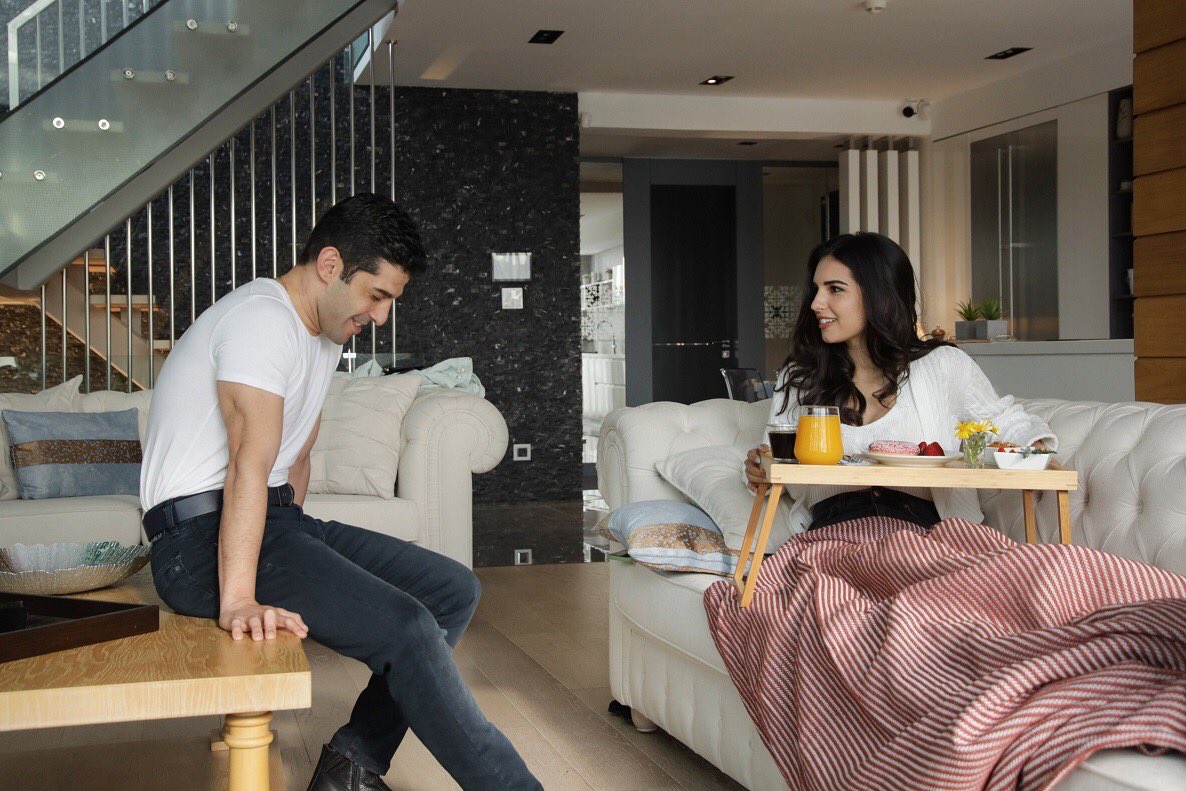 Annd abi is coming...I guess that will be cliffhanger


Abi is another bad boy! nad he is Russian or from some other Slavic country cause the way he said "Brat moj" . But great to see Olgun, he even manage to change color of his hair!!! and Ariza just finished, he literally jumped from one set to another!

Also it will be interesting to see Selim's secret coming out and how Canan will react.
Still I think that main guy behind all problems right now is Selim's father. But such revelation needs to take some time, they need drama for later
Top

Ahh be Seliimm
No wonder why he never told anyone about his family, also this just proves why he wanted to help Akgun's mom so much and why he loves Akgun.

Go Canancim, be with your boy! He needs that hug!
Top

I missed one part, gonna catch up, but second one was great! Well maybee bit slow tempo but eventful!
I love how Selim stepped on Fatih! He totally got him, well for short time but still!
In order not to droll over Akgun every week, just gonna say that once again he was more than adorable!

that poor boy really needs to have someone next to him he needs family and support!

CanSel was really really good in this epi! We saw why they have such great connection, great relationship of one couple!
Well I think we got another proof and we can say for sure that Halil Sadi is Selim's father. plus that guy is like super smart! He is holding all ropes and just pulling them however he wants!

baya deli bir insan!
I got to say ofc I don't like how they introduced Gokhan but i have mixed feelings about him right from first introduction. He at least from now doesn't seem like proper mafia boy nor he is looking for lot of problems. I hope that him and Akgun will have good relationship which probably will go from huge fights to helping each other.

Ali and Funda nailed it in this episode! They have great chemistry as partners!


Both cried in this scene

and Akgun was true himself in two situation, when he pushed her and was rude plus when he ran after her and cried.

Masallah benim can dizim! One of the highest ratings they had!
and 2nd between all dizis in AB an ABC category


But I think Gokhan might be his brother, they can doubt it but imo he is. Cause if it was Soner than he would recognize himself on that photograph
Top

Imo what might turn out to be is Halil telling Gokhan to act as Akgun's brother but he didn't tell him they really are brothers. So than we will have whole drama with Gokhan finding out the truth and learning more about him
Top

I skipped few scenes, gonna catch up on them, but biggest impression of this episodes are couples!!!
CanSel was so so so soooo cuuutteeeeee! Off bee, incredible chemistry and bond that Funda and Ali share on screen
The way they want to start together again, and to make it secret


This maybe was the first scene we saw them like this, together and all full of love


And of course AkMur good as always.
Btw how super mature and smart from Yagmur to do DNA test, isn't she 18?!?!??!

That last scene was bomba gibi, nicely shot, ama maalesef that guy Halil Sadi used Gokhan and his sickness. so probably abi won't stay for too long here. He said he has 6 months.

Also I forgot but Soner is Halil Sadi's son, which means Selim and Soner are brothers?
Top

Got to say i didn't understand what's going on in fragman


Boys re on mission, even Soner is wearing suit and tie, AkMur is crying but kissing, Gokhan probably saw Selcuk...and CanSel is caught in action

"Hepsini manyak bunlarin" like really, they are so funny all the time! The way Akgun is coming with such random topics to talk with Selim when he wants to take his attention from important things and the way Selim just doesn't give a f

Akgun is turninr 21 but he's already been in prison few times, fought with mafia, runs a restaurant...

Savcim what are you doing??

I guess this show managed to last 18 episodes without sacma and now they started with all usual stupid plots...

I hope in one way they'll manage to keep it light as it was so far, but hearing Gokhan saying he plans to kill Akgun, that was so so bad, like utterly stupid!
How they couldn't come up with anything else?

I missed Soner and Naz, they barely had scenes. AkMur went through roller coaster, but it ended well. CanSel this time overtook the main couple position and shinned bright!

This episode was like continuation of previous one with many things solving.

But I am just not fan of how Halil Sadi is so powerful. But if they are really going into S2 than him showing up will be like season cliffhanger 100%.
Top

And here I am finally to keep you company @mili cim

.... I've been enjoying the show without commenting.

Let me see of I can activate commentary mode here... görüşürüz

@QueenLola off beee sonunda!!
So tell me, what you think about couples?
And abut Akgun is he true salak or super naive? Also do you mind him crying all the time or no?
For me it's fine cause I love how emotional he is, cause he is actually a baby who wants to be loved but he is acting like grown up trying to cover himself and not to look like a small cocuk who wants his family.

I have a feeling Alperen is not acting per script but he is improvising all the time...
Bu ne lan?

It is too bad the show is not getting more ratings after Ramo left.
Btw seeing Çukur's Cihan and Emrah as besties is funny

mili wrote: ↑Sat May 01, 2021 8:31 am @QueenLola off beee sonunda!!
So tell me, what you think about couples?
And abut Akgun is he true salak or super naive? Also do you mind him crying all the time or no?
For me it's fine cause I love how emotional he is, cause he is actually a baby who wants to be loved but he is acting like grown up trying to cover himself and not to look like a small cocuk who wants his family.

First of all, I consider the script dark comedy cos I'm always rewinding and laughing at something

)
The best couple is clearly CanSel

. We're blessed to have 2 strong actors carrying out that script

. Everything is so natural... I've never seen any of Ali's previous work, but Funda always delivers top performances. They really come together and make their scenes amazing.... plus you know I love a good mature çift plot

AkMur is fine but too chaotic and undecided IMO. and I always blame Yağmur. I don't connect with her meddlesome busybody antics

and the desperation to "rescue" Akgün tends to defy logic a lot for someone who is always regarded as smart.
Thankfully Canan seems to have forced some sense into her after that whole wanting to get married asap business.
I think both Akgün and Yağmur have a lot of growing up to do. Yağmur has to detach herself from relationship mode and figure out what she really wants. She spent 4 years with Kaan and apparently wasn't really into him.
As for Akgün... he's quite the naive and gullible gangster

. He literally survived in that world thanks to his father's name, cos I doubt he would get any where otherwise. It's almost like he forced himself to fit into that role of the tough gangster's son. Çok şükür for Soner in his life (he gives me a grudging Firat to Miran feeling

. The way this çocuk grew on me. Now HE understands the shadiness of their world and is always on alert unlike Akgün. I don't blame him for being distrustful, after the terrible upbringing and lack of recognition by his own father. It'll take him a while to consider himself worthy of acceptance and also accept people.
I'm enjoying the budding aşk with Naz. However it ends, it's a starting point to fighting his own demons. N az like her cousin also needs to define what she really wants cos her daddy issues also put her in this path to Soner.... and its cute, but she needs to be clear.

You know I love a good bromance too and what Akgün and Soner have with what Akgün and Selim have warms my heart. All the AkSel scenes are top notch and are usually the ones I'm rewinding and laughing at

Neyse, that's my general feel of the past episodes. Will add other things later.

I also see a lot of improvisation. In fact, I think his scenes with Ali tend to have improvs.
Despite how tense they might be acting, you can see they're having fun with it

In fact, him and Soner being old fashioned like and Eray actually the only one in the ground acting and dressing the normal age is funny.

QueenLola wrote: ↑Sat May 01, 2021 10:33 am AkMur is fine but too chaotic and undecided IMO. and I always blame Yağmur. I don't connect with her meddlesome busybody antics and the desperation to "rescue" Akgün tends to defy logic a lot for someone who is always regarded as smart.

With AkMur is problem that they are too young! Just 18 and 21(from last epi) but they are acting like at least 25 or older, with many conclusions and moves they are making. And than at the end all they do look childish, reflecting their age. But yeah even though I like Yagmur she is very inatci and doesn't think rational.

I'd also like to add the great relationship and parent role of CanSel to Akgun! Both are protective, helping and really cares about him! and than on the other side, Akgun is showing so much respect to both of them. He is a different person with them and with others.
Top

No new episode this week
It can be seen here on Fox's site
https://www.fox.com.tr/yayin-akisi

Maybe someone was positive...we'll find out
Top

Even though it was confirmed long time ago here comes another confirmation that Son Yaz is continuing. I guess now we have to worry not to move them to Istanbul

This Akgun's reaction explains well situation. Anyhow we can look forward to fragman today
We got confirmation from Birsen that season will end with episode 21. IT was first planned 22 but they made a break so one less

Still no fragman...no info about new episode...
On Fox's site it's written new episode will air
If they skip another week it won't bring good for them...
Top

Off be finallly fragman!
And yeah again no new episode this week...

No new episode but Alperen treated us with with this selife